Water from The Rock 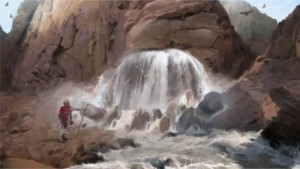 17 From the wilderness of Sin the whole congregation of the Israelites journeyed by stages, as the Lord commanded. They camped at Rephidim, but there was no water for the people to drink. 2 The people quarrelled with Moses, and said, ‘Give us water to drink.’ Moses said to them, ‘Why do you quarrel with me? Why do you test the Lord?’ 3 But the people thirsted there for water; and the people complained against Moses and said, ‘Why did you bring us out of Egypt, to kill us and our children and livestock with thirst?’ 4 So Moses cried out to the Lord, ‘What shall I do with this people? They are almost ready to stone me.’ 5 The Lord said to Moses, ‘Go on ahead of the people, and take some of the elders of Israel with you; take in your hand the staff with which you struck the Nile, and go. 6 I will be standing there in front of you on the rock at Horeb. Strike the rock, and water will come out of it, so that the people may drink.’ Moses did so, in the sight of the elders of Israel. 7 He called the place Massah and Meribah, because the Israelites quarrelled and tested the Lord, saying, ‘Is the Lord among us or not?

This week we celebrate Harvest which is a time when we consider what we have, where it comes from, and give thanks. We give thanks on the basis that we recognise something very important ; that is that what we have is not solely the fruit of our own efforts, though we may be involved. What we have ultimately comes from some other source than my own hard work, and we as people of faith have come to the view that source is God. Perhaps, the wilful denying of that fact, or forgetting it, is the true meaning of the Fall story – we all too easily default to our own efforts and intelligence and forget that we are contingent beings – we depend on things that are not in our control.

We plough the fields, and scatter
The good seed on the land,
But it is fed and watered
By God’s almighty hand;
He sends the snow in winter,
The warmth to swell the grain,
The breezes and the sunshine,
And soft refreshing rain.

So we turn to our quoting text in Exodus, where we may be tempted to repeat last week’s lesson in its entirety. On one level is a simple repetition of the human frailty and fear that rebelled against Moses and God when food looked like running low and led to the provision of manna and quail in the desert. Lack of gratitude, a rose tinted memory of the past, and the effects of fear and unbelief bring bad behaviour to surface in the lives of God’s people. But God’s response is to gracefully keep providing. The harvest thanksgiving message is precisely that. Thank you God for providing for us, despite ourselves.

There is a key difference here – thy lacked not food, but water. They can’t carry much water, it is hard to store, and its need or more pressing – we cannot survive long without it, unlike food. So the presence of water determined the course the journey – they needed to grow here water could be found. However, God had led them to a place without water., which constituted not an an imaginary crisis, but a real one.Why?

We reflected that sometimes the time of testing was of God – it was a test of their belief but not a pass/fail test , rather a revelatory test, like a school test – “it shows us how we are doing”, and where we need God’s help. These episodes in life are not news to God but they are news to us – these things reveal ourselves to ourselves and give us the prompt to either turn to God wholeheartedly or reject him.

Last week we read that this incident (manna) gave rise to Deut 8 – man shall not live by bread alone, quoted by Jesus when he was in the desert, when he was undergoing testing and was both hungry and thirsty. This week’s story is similar but different. Here we see, you will not put God to the test, which Isaiah states in Isaiah 7:17 and Jesus repeats in the desert.

MASSAH AND MERIBAH: A PICTURE OF GOD’S PRESENCE AND POWER

This incident at Massah and Meribah is where God graciously provided His grumbling people with water in abundance. In spite of the great sin of the people in disputing with Moses and in putting God to the test, they were abundantly provided for. Because of this, the rock at Massah and Meribah quickly became a symbol of God’s presence and power among His people.

Because God is like that, we should try and be like that too. In his letter to the Ephesians, Paul writes this

Imitate God, therefore, in everything you do, because you are his dear children. 2 Live a life filled with love, following the example of Christ. He loved us[a] and offered himself as a sacrifice for us, a pleasing aroma to God

The Exodus story shows us what God is like and what we should try and be like – that means the extension of grace to the undeserving. How easy to fall back into the worldly pattern of only blessing those who bless us. Your decision to be grateful to God, and treat people with good grace especially when they do not really deserve it, will mark you out as God’s people. It is a distinguishing mark of the Christ centred

Let’s look further at the imagery in the story – water from a rock, God providing sustenance from a dry place.

We think of God our Rock as symbolising solidity, strength, something that cannot be moved. Whilst that is true, it is not the use of t term in scripture. The rock paradoxically is the rock as the source of water, the source of life, representing not the strength of God, but his faithfulness.

So we can see that the rock of Massah and Meribah became the symbol of God’s presence with His people.

“He opened the rock, and water gushed out; like a river it flowed in the desert. For he remembered his holy promise given to his servant Abraham” (Ps. 105:41-42).

The “rock” of Exodus 17 is therefore employed as a symbol of Israel’s hope for the future, because it symbolized God’s faithfulness to His people in the past when He promises to be faithful in the future: “They did not thirst when he led them through the deserts; he made water flow for them from the rock; he split the rock and water gushed out” (Isa. 48:21).

Here is the irony of the passage. At the very time when the Israelites are inclined to doubt (or at least dispute) the presence of God, the text informs us that God was very present, and the New Testament goes so far as to tell us that Christ was present as well. Was God among them? More so than they could have dreamed!

God Is close when we think he is absent.

When we are feeling that God is absent, he is actually closer than He has ever been.

GOD OFTEN REVEALS HIS PRESENCE THROUGH CIRCUMSTANCES IN WHICH HE APPEARS TO BE ABSENT.

This principle is a reflection of the two principle themes of our text:

(1) that the Israelites doubted God’s presence and demanded proof of it; and

(2) that God was far more present with Israel at Massah and Meribah than the Israelites ever knew. God uses those times in which we suppose He is absent to show us how real and present He is. Are you in such a place now? Hard as it may seem, remember that God is closer to you now than at ever other time.

Here are three things to remember from this story today :

1. The Lord led them into that place.

Remember we learned last week that we can be led into times of testing by the Lord to test our faith in order not to pass/fail us or condemn us, but to reveal our likeness to ourselves and learn to depend on Him more. In times of testing we grow.

2. We reflect, especially at harvest time, that God blesses us because of what he is like, it because we deserve it by our moral excellence.

God loves you because He is good, not because you are good.

What he asks, is not that we should berate ourselves but
a) be grateful
b) be gracious in turn to others ; a society based on that one principle alone would be transformed into something close to the Kingdom of God.

As we gaze upon the fruit of the hardest, both material (at the altar) and financial (in the offertory plate) let us

-Thank God that we are so richly blessed, whatever our wants and desires, we have our needs.

Reflect continually on our journey and how the Lord has shaped us in faith.

They asked, and he brought quails, and gave them food from heaven in abundance.

He opened the rock, and water gushed out; it flowed through the desert like a river.

For he remembered his holy promise, and Abraham, his servant.

So he brought his people out with joy, his chosen ones with singing.

He gave them the lands of the nations, and they took possession of the wealth of the people’s, that they might keep his statutes and observe his laws.
Praise the Lord!