Barry Hingston
July 18th, 2018
Comments Off on Jesus loves us the way he finds us, but loves us enough not to leave us as he finds us. comments 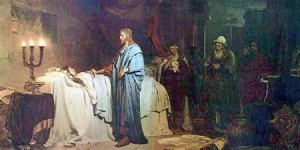 Jairus’ daughter and the Women who touches Jesus (Mark 5:21-end)

Two stories are here woven together, where both central figures are female. The place of women in the church and indeed in the kingdom of God has received very great attention in recent decades and we live now in the middle of a revolution.

The bible is primarily “patriarchal” in character, reflecting the culture of its origin, but has as surprising amount to say about women, and they are surprisingly central to what goes on in the life of Jesus, despite the fact that his inner circle of disciples were admittedly all men.

In Israel, the place of women seems to have deteriorated in what we call the inter-testamental period,  between what we might regard as “Malachi and Matthew”. An aristocratic scholar of Israel named Ben Sirach argued that that women should be “good mothers and wives, but if you don’t like your wife, don’t trust her and keep close records of the supplies you entrust to her, do not entrust her with property and do not let her support you.” Basically, women were responsible for sin coming into the world and daughters were a disaster! Jesus comes into a society that has been influenced in this way for 400 years or longer. How did he respond ?

The first woman in our reading that is the woman affected by an issue of blood. He is surrounded by a crowd so great that he is not sure who is actually touching him at any given moment but mysteriously, healing power flows from Jesus to the woman without his deliberate intent. Somehow the Holy Spirit, flows through him and heals the woman. I do not wish to explain that, merely to note it.

The more significant thing so what happens next. Jesus is aware of the power that has just flowed through him and wants to know “WHO TOUCHED ME?”. The crowd stops moving, silence falls into an awkward embarrassed tension. Lots of people touched him, he was in a crowd, but someone’s contact with him had been deeply significant.   That is somewhat true of every meeting here at St John’s. We gather a crowd of 70 or 80, all of whom “touch Jesus” in a certain way. But usually there one for whom that touch is deeply significant. God has a special gift for someone every week, but it is not everyone every week.

The woman knows it has happened to her,  but right now she is afraid rather than overjoyed. She knows that she should not be around other people with an affliction that made her ritually unclean. The trouble was, in this legal sense,  she would be unclean most of the time, and consequently completely socially isolated. She is not just afraid of Jesus, but the crowd of people, lest she be shunned, excluded , and punished. So it is in fear and trembling she falls down before Jesus. What happens then is revealing

What is said about Jesus is that he cared for everyone. His agenda was abundant life for everyone.   If the gospel authors and actors had felt that women should not be shown in this light, they were perfectly placed to edit these stories, along with Mary Magdalene, the woman the well, the Phoenician woman, and the woman caught in adultery, out of the record.

Let us look at our second woman.

Actually she is not even a women but a girl, which makes her standing even less, were it not for the fact that she was the son of leader. Our friend Ben Sirach wrote that a daughter was to the father, a “total loss and a constant potential source of shame”. Jairus to his credit clearly doesn’t feel this way and comes to Jesus also in desperation. His daughte