Who Do You Think You Are, Jesus ? 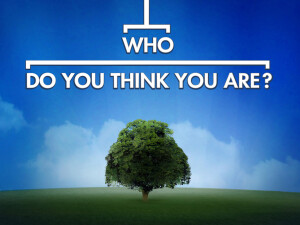 Who Do You Think You Are, Jesus ?

Jesus family tree. It is not comprehensive, it is possibly artificially created by which i mean it is looks like a brilliant theological statement rather than a literal historical record. The occurrence of three blocks of 14 verses (multiples of the Jewish sacred number 7, suggests something symbolic and theological. In other words, people are included in it because of that they say about the revelation of God in Christ – this family tree tells us what God is like.

And the amazing thing about it is the inclusion of the imperfect and even the un-virtuous. My father once tried to do a family tree (before the Internet) and so ran out of steam in the 19th century as it became clear that the historical Hingstons were barely able to sign their own name, let alone boast of any great virtue. In the case of Christ, that family tree is enshrined in the eternal word for all to see.

The genealogy includes four foreign, non-Jewish women, of whom at least three of which were women of questionable moral standing.
• Tamar (Genesis 38) is , a Canaanite woman who poses as a prostitute to seduce her own father in law in order to bear a on offspring after the death of her own husband.
• Rahab actually is a prostitute and also Canaanite, who marries one of the Hebrew spies in Jericho, and give birth to Boaz, a righteous man who is important in the bloodline of Christ.
• Ruth , wife of Boaz, also included is not only a foreigner, but a cursed Moabite, a descendant of the incest of Lot in Genesis 19. The wonderful beautiful inclusion of Ruth in the OT isa forerunner of the induction of everyone by Jesus Christ – she is almost the last person you would ecct so see in the messiah’s bloodline……a Moabite!!
• David, a violent man, and an adulterer, and also his unnamed wife here, Bathsheba, who was party to his sin (even in those days it still took two to tango).
Even the other names contain honest reflections of human character, not paradigms of virtue. Solomon, the fruit of that liaison, – a man given to multiple breaches of the law, husband of many wives and lover of treasure King Manasseh is possibly the wickedest king that Israel ever had, but gives rise eventually to a grandson, Josiah, possibly the best king they ever had after David, and a key influence in turning the Jews back to their law and faith.

What is this passage saying ? It is saying . Jesus would proudly own the fact that he came from the same ordinary, human, broken sinful suffering world that all of us do. His birth accepted and embraced and ultimately affirmed the human condition, that which was created in the image of God. It’s all there – the sin, the pride, the sex, the murder, the idolatry and the materialism . Jesus not only takes on a human body, but steps into the line of the most broken, dysfunctional people you could imagine.

What image do we want or present of Christ? Do we rely too much on authority, on the position of pets and archbishops, of buildings and grandeur, or canon and liturgy and tradition, vestments and externals? None of this give us the authority and credibility to represent this incarnate Christ to the baffled world. Jesus authority came from his authenticity – the authenticity of the message he brought, and the life he lived – he openly proclaimed in his very existence the transformative power of a journey through the messiness of life, into death, and through death to resurrection, all physical, carnal and literal.

God is shown through the revelation of Jesus to be something very special. He is not like a modern supermarket, who dispenses with all the flawed, misshapen fruit and veg, throws away the imperfect and insist on things looking good from the outside. God through Christ shows that he embraces it all – the sinful, the lost, the imperfect , the ordinary the un-virtuous the lost and the least of our world. God in Christ welcomes it, embraces it, even becomes it in the Jesus event and says, “Bring it to me and I will heal , redeem it, and then it into something wonderful.

Jesus does not deny that a thing is broken – he does not say that bad is good, merely that it can be made good : John 3 :17 says, “ For God did not send his Son into the world to condemn the world, but in order that the world might be saved through him.”. Jesus says, “Yes, it is broken, but that does not matter, for that is why I have come”.

Brokenness and imperfection for Jesus is not grounds for rejection, it is simply evidence of the end for healing, and healing is what i came to do. I be faithful disciples of Christ, we must embrace the same incarnational spirit – e must accept that not only are all “those other people out there “ imperfect, holy sinful and broken, but hat we are too. Indeed it is the very recognition of that that qualifies us for God’s mercy – blessed are the poor in spirit, for this is the kingdom of heaven.”