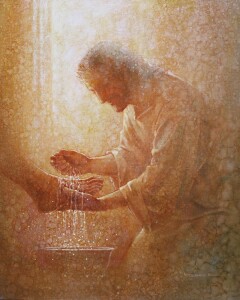 Bishop John Taylor was one of the twentieth century’s leading Anglican missionary statesmen, General Secretary of the Church Missionary Society at a crucial stage in its development and later Bishop of Windsor. He wrote several books which are the staple diet of theological students including “The Christ-Like God”.

The central thesis of “The Christ-like God” is that if we want to know what God is like, we look at Jesus, the visible expression of the being of God. The provocation in the title is that we tend to think of it the other war around: Jesus is a bit like God, not the more challenging statement “God is like Christ”.

The purpose of incarnation is revelation. The point of Christ is to show us the Father, not just point us the way to the Father. He who has seen me has seen the Father. John Taylor begins by pointing out how few religious people – or non-religious people – even stop and think about God, but tend to live with an unconscious, unquestioned stereotype. So, what is your idea of God? Where do we acquire our idea of God?

For some it is from “authority”: the tradition of the church tells you what God is like, God is someone over there (or up there), He is like this, and this is what you should do in response.

For others is comes from thinking, from “reason” – academic sources tells you what God is like, using philosophical language to try and define God. This is usually not God, but the idea of God, and the power of logic, but for some it is important.

But for many is is what Taylor refers to as “hearsay”: we don’t really have an idea of God, we just have something from other people tell you. Our perception is often second hand, the God we ought to know but don’t really.

Our idea of God usually prompts loyalty and devotion, and maybe comfort in a changing world, so we don’t like our idea of God to change. However, that changeless and fixed God-picture is more like an idol than a living relationship. Nor do we take too kindly to other people’s view of God; when we encounter other pictures of God we sense conflict with our own image, and so we get cross, or anxious, or highly defensive. Perhaps we need to defend not just our view of God, but God himself, and ourselves with it.

Too few of us regularly stop and think about God – the thought of God may often be in our minds, but we so not stop long enough or with enough stillness to dwell on it or explore it. Consequently, for too many of us, the view of God today is the same as it always was – it has not grown, it has not changed.

The Christ-like God simply says that the person of Jesus tells you what God is like.

The idea I want to place briefly before you tonight is that we a picture of God before us tonight. Tomorrow (Good Friday) we need to wrestle with the Crucified God, to use the title of Jurgen Moltmans’ seminal title of the 1970s. The God who dies, who embraces humanity’s final enemy, or has it afflicted on him. On Saturday we contemplate what it means for God to endure Hades or Sheol, for Christ the Son to be separate from God the father and Spirit, and what that means for us.

But on Maundy Thursday, we contemplate the Servant God. the one who comes to earth in the form of vulnerability as a baby and grows in stature and spirit to demonstrate God to all who saw and heard him. That same man, that same God in human form donning a loincloth, and a bowl of water and doing the unthinkable and degrading. God stoops and after all objections, deigns to do the job a slave or a household servant.

And not a pretty job either. Judean roads, as you know, were dirty and dusty. The climate is hot and humid. And footwear basic and ill fitting. It is reasonable to surmise that human feet were not the pinnacle of physical beauty – hardened, bruised, blistered perhaps, certainly dirty and sweaty and unpleasant. For all these obvious reasons this job was definitely the task of the lowly. To be made to do it bordered on humiliation.

To embrace the task, and then insist upon it, is part of the Christ-like God revelation. Why did Jesus do it? It was because he reflected the heart of God, who loves his people and always seeks to serve them, bless them, hold them and make them thrive. God is not above washing feet, indeed to be God he insists on washing feet. Washing feet is in the nature of God.

The Son of Man came not to be served, but to serve, and offer his life as a ransom for many. Washing feet what something you did to honour your invited guest before the meal; Jesus washed his disciples’ feet, set aside their reluctance and shock, and then inaugurated the Lord’s Supper, the meal to which they, and we, are invited.

Perhaps Jesus wanted to almost shock them into seeing what God is really like, instead of accepting their hearsay God, second hand from other people. Jesus in washing the disciples’ feet reveals the nature of God that we have put to one side in favour of the bearded holy father-figure who judges the world. Jesus then moves on to the New Commandment: to love another.

God the Father, cease your striving, your wrestling with dogma and religion, and simply look upon my Son who washes your feet now, and understand – that is what God is like. We as Christians do not follow a good man who was in some ways similar to God. We worship a God who is like Christ, perfectly revealed in him.
Your life is an offering of worship to God. That is what you are for. But true worship is not just to be found at this altar – it found at the altar of the feet of all those around us.