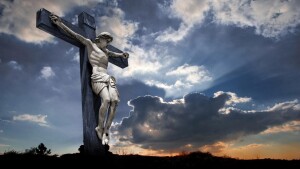 “Father, forgive them for they know not what they do.”

I live a life of religious faith, much as I dislike the term. It means that I try to live my life according to one central driving concept – an idea of what God is like. The life of the confirmed theist, be he Christian, Muslim, or Jew or whatever, is centred on the idea that God exists, that God is concerned with us, engages with us, and that it is of some importance what we do in response to that.

How do you respond? That response is dictated to a huge degree by what you think God is like. Is God all holiness, distant and unapproachable? Is God all-powerful, which may make him fearful and unpredictable? Perhaps God is all justice which may mean you don’t think about him because you know you are sinful. Or maybe God is just a mysterious idea, and life is too full to delve further.

Or, just maybe, as John puts it so simply in his letter, God is love …?

When it comes to Good Friday and the cross, we must ask ourselves the questions of what God is like? Here God, or God’s servant, is subjected to brutal human violence, in order to achieve some kind of victory, or achievement, or payment …?

The Cross represents what many understand as “atonement” and there are miles of theological bookshelf devoted to exploring that that means. I propose not to go down that road now, But simply to dissect the word “atonement” is literally “At-one-ment”: bringing together that which is separated or alienated.

Satan, “diabolos”, is that which accuses, divides and alienates. God is the great healer of all division.

God in making at-one-ment, in healing the divisions, embraces the Cross. The Cross, a Roman symbol of retributive violence: it solved things by violence and sheer fear, it was rule by terror, those who hung on the cross were to be an example to others, and the more awful their death, the better that purpose was fulfilled. Taken literally it is a symbol of retribution and violence, and represents rule by fear, devotion to Rome by deterrence.

However, even the Cross has itself been redeemed. It now stands for something else. It reveals God’s forgiveness. At the lowest moment of his agony, Jesus cried “Forgive them for they know not what they do”. At the very moment when God’s retributive vengeance would have been most justified, instead we see God’s bottomless forgiveness. The Cross shows how God forgiveness goes on and on, tested by the worst that humans can do.

And yet, sometimes that, even that, annoys us. We should love it, but we hate it: we hate it because it is extended to those we feel do not deserve it, and sometimes we feel that includes us as well. Jesus angered people by his forgiveness; from the sick, who were felt to be punished by God, to the legions of unworthy and excluded people that Jesus embraced: women who were held to be of no worth, children even less, lepers who were shunned and outcast, Gentiles from Centurions to Phoenician and Samaritan women, and worse still, tax collectors, and prostitutes. If they’d heard him welcome the crucified thief into Paradise on the cross, they would have hated him even more. Sometimes our image of ourselves cannot bear to be seen in the light of God’s light and love.

So What About Us?

Jesus says that, “He who has been forgiven much, loves much”.  Jesus asks us not to resent, but to repent, to love others as much as we possibly can because the Cross shows that is what God is like. We do not denigrate the seriousness of sin, simply turn it on its head,  marvel at how much we have been forgiven, and make that the determining factor in how we treat other people.

So what emotion do I want to feel as I walk behind the cross or stand or sit beneath it? We may well feel sadness at man’s condition, that the death of God in Christ was always needed to heal us of our self-inflicted wrath. We may feel Joy: “It is finished!!”, says Christ, the deed is done. Both of these are right, of course.

But please not … guilt. Please not guilt. If we do not feel bathed in God’s love, released by his forgiveness, and made into new creations responding in love and joy to our salvation, then the cross means nothing at all. The Prodigal Son’s attempt at guilt is summarily brushed aside by the loving father, who has already prepared the celebration.

On the third day Jesus rose with not a word of vengeance, only “Peace be with you” (John 20:19).  Today you are invited to respond not to God’s anger, but to God’s utter forgiveness of all that you are, and his utter determination that you will be all that he intends you to be.

Walk from here light-hearted and carrying no burden. For it is finished. He who knew no sin has become sin, so that everything will be reconciled to Him.