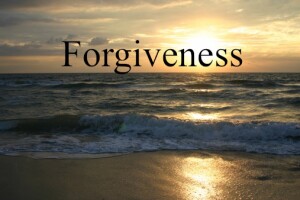 One of the most attractive concepts in Christianity is forgiveness. The idea that my sins, past present and future, can be forgiven and that I can be right with God is one of the central tenets of the Christian faith. Each week where we worship, we start our service with worship then fulfil a “Penitential Right ” where we confess and are absolved from our sins.

However, for Jesus, forgiveness is a challenging concept for us. The emphasis is on our duty to reciprocate the forgiveness of God by extending the same grace to those around us. Suddenly, forgiveness becomes a bit less attractive – it is not just a gift to me, but a challenge to me.

Consider the following, which is a reflection following a verbal discussion with a couple of people in church. It is not born out of a specific incident, just a  reflection on what is happening generally in my life. I would have written something different 20 years ago, I’m sure, and I certainly do not require anyone to agree with me, just to reflect on what I suggest…

1. Forgiveness is vital, and not an optional extra.

This is because forgiveness of others is essential to my well-being. I cannot have inner peace and healing unless and until I have let go of the debts that I feel are owed to me by others. Lack of forgiveness, or a refusal to forgive, is less of an offence to God than an act of self-harm. I suffer, no one else, and my inner peace is badly affected.

2. Forgiveness is central to the practice of Christian life.

Such is God’s passion for our harmony and health, that this exhortation occupies a central piece in the life of the person called to be Christian. It is part of the way Jesus taught us to pray, enshrined in the words of the Lord’s prayer itself  -“as we forgive those who trespass against us”. The word “as’ ‘ is important and worthy of consideration.  It means either:-
– In the same way or manner as I forgive…
– To the same extent as I forgive…
– On the assumption that I do forgive, using forgiveness as a pattern

So immediately after this prayer in Matthew 6:15 it appears as a mysterious precondition to our own forgiveness. This is not a popular verse, or one I have ever heard preached on, but just read Matthew 6:15: “If you don’t forgive men their trespasses, neither will your Father forgive your trespasses.” Have you noticed that before?

Some might say that this means the unforgiving Christian loses their salvation and end up in hell with “everyone else”. I do not believe this, for reasons I could expound but will not here. However, it must mean something. In my opinion, it states that un-forgiveness irreparably damages your relationship with God as long as it persists. Unless and until forgiveness occurs, you will not sense the close presence of God, or the peace of Christ, or the tenderness of the Father as closely as you otherwise would. Un-forgiveness is fatally damaging, even if it does not have eternal consequences (and some might argue that it might).

4. The forgiveness we are called to know no limits.

When Peter broaches the subject in Matthew 18:21-22 and asks how many times he could forgive his brother, Jesus replies “seventy times seven”. I know no one, no teacher, no preacher, no scholar, no Christian I have ever met, who remotely believes that Jesus intended to say “490”.     Seventy-times-seven means, forever, which in the context of Peter’s question, means forgiveness is required whether our brother repents or not (otherwise it wouldn’t be needed at all). That is a tough qualification and I know many people who reject it, simply because it offends their human sense of justice and fairness. And yet, the forgiveness that Jesus teaches to Peter is unconditional and unending.  The most powerful and transformative kind of forgiveness that I know about is the type that is undeserved. It is also the most powerful form of testimony and witness to Christ.  History has many examples.

It is because Jesus is the Lamb who takes away the sin of the world (John 1:29). Jesus has taken away the sin of the world, including the one done against you and I. My duty to forgive is not conditional on the repentance of my offender. Our job is not to mete out justice on God’s behalf but to participate in the Kingdom of God.  The Kingdom of God is a realm that is very different from own intuitive thoughts and feelings, where grace permeates everything and just deserts

The parable of the unmerciful servant is powerful and telling. To underline my point above the servant is expected to forgive, precisely because he has been forgiven. Forgiveness and grace become a benign virus that spreads from person to person, transforming the world. His Lord expects nothing less; he requires no thanks or payment other than the servant forgives in turn those who have a debt towards him. Secondly, the debt he is asked to forgo, though small in comparison to the one he has been forgiven, is nevertheless a large one. Jesus’ use of numbers is important;

In fact, the second servant owes 100 denarii. The denarius was about one day’s average pay. So, 100 denarii is more or less three months’ salary plus a bit more. Expressed today, because I earn roughly the average salary for the UK, for me that would be a debt of £7,500. That would hurt, let me tell you. Whilst nowhere near the colossal debt he has been forgiven, it is still costly for him to forgive this debt.

Forgiveness therefore s not a philosophical way of looking at something differently, it is letting go of something to which we feel entitled.  It is a hard thing to do ; it is not that we are not owed this debt, but that we are asked to let it go.   Letting go that to which you are entitled is harder than deciding you are not entitled to it at all. The latter is true forgiveness, and it is difficult and actually costly.

7. So forgiveness, in the words of Jesus is :

– Unlimited – seventy times seven does not mean 490.
– Unconditional – because  if seventy times means forever, it can’t be conditional
– Costly – Jesus is not just teaching about forgiving someone stepping on your toe whilst standing up on the Tune.

8. A couple of final points

Forgiveness is about letting go of the debt owed to you, whether or not they are sorry, if only for your own peace and health. But it does not, in the hard reality of life, always entail “reconciliation”. The cosmic victory of Christ over sin will, I believe, bring ultimate reconciliation for all things (1 Corinthians 1:20). But for me, my first imperative is to forgive my offender, whether or not we can become best buddies. If for example I am the victim in any kind of  abusive relationship, it remains important for my own sake and happiness that I am able to forgive, in order to remake my life and live it in all its abundance. But it would be folly to suggest that I should start to live with that person again as if nothing had happened. Forgiveness is about letting go of my hurt, not of my senses.

Also, forgiveness is not about “letting people off” or the removal of law, and does not equal no consequence. Governance of relationships, families, communities and nations sometimes require that sins that cross certain lines attract due process, be it  of law, or some other form of governance.  Punishment can still occur even when there is forgiveness because, for example, otherwise we cannot run a complex country of 60-plus million people. I may need to forgive the person who burgled my house, and it would help me to do so. But it is essential that the same person is also subject to due process of law, because the well-being of the whole country depends on the upholding of that standard. There are excellent philosophical and spiritual reasons why the punishment of a person is entirely right, completely healthy, and even indispensable. Done correctly of course, it can be restorative, and every effort should be made to make it so. Consequences do not equal retribution, but they do not go away.

The life of the Christian is intended to be strikingly distinctive. It is a light on a hill. It is intended to point the way to God, to people who are living in darkness. That distinctiveness is not limited to doing things we enjoy. It is costly, counter intuitive, and does not always conform to our ideas of fairness or justice for ourselves. Forgiveness is the prime example of this.

I do not pretend to be perfect in this regard. However, I have discovered from a very young age, that hanging on to things is desperately damaging not just to my brother or sister, but to me. I know it affected my relationships with my Father, and I know it harms the world around me. 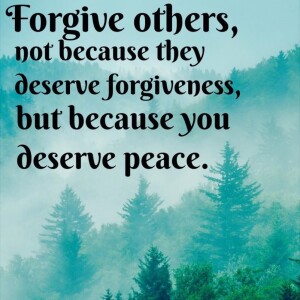 Lord, forgive me when I cannot forgive. Help me to know that you require this of me and will help me. Grant me not just the gift of forgiveness of myself, but the ability through your Holy Spirit to forgive others. And help me get better at it, because I will probably need to pray this prayer again.
Amen